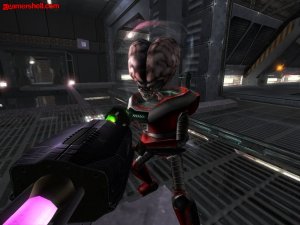 COR Entertainment LLC has announced the release of Alien Arena 2008 which features nearly all new game media, gameplay improvements, and a client that has been signifigantly upgraded for improved visual effects as well as major optimizations that greatly improve the fluidity and performance. Alien Arena 2008 also offers a change to it's overall theme, moving towards a slightler darker, more serious tone, while still retaining a good bit of it's retro style, creating an interesting marriage between classic and modern sci-fi. This resulted in completely new player models, many new weapon models and textures, and seventeen new levels. There are major improvements in weapon effects, per-pixel lighting, texture resolution, and resource usage, as well as the addition of a cross platform server browser, FUSE. Weapons have been tweaked for better balance, and movement has been enhanced with the addition of dodging abilities.